Some taxation is just plain morally and ethically “wrong”. Would you pay tax on something before buying or selling it? Of course not, but that’s what an assessment does. It taxes you on the unrealized hypothetical “value” of your real estate.

If you are a retiree on a fixed pension (fact: 47% of all retirees have ZERO employer pension[1]), 11.1 per cent live in poverty, and 30 per cent of all women living alone in their senior years are poor. At best, their government pension is adjusted by CPI (consumer price index). Is it not morally, and ethically reprehensible for politicians to raise taxes continuously 50-100% more than CPI on these vulnerable members of society?

If a foreign purchaser builds a new $2.5 million mansion because they can afford it, as well as the taxes, why should the entire neighbourhood be reassessed?  What if the poor retired property owner next to the mansion can hardly put food on the table? There is no moral or ethical justification for driving that person out of their home with taxation.  And to be clear, to say that the taxes can be deferred is at best foolish, if not arrogant. If deferred, the tax is taken when the home is sold, so now long term care can’t be afforded, and the poverty cycle deepens. 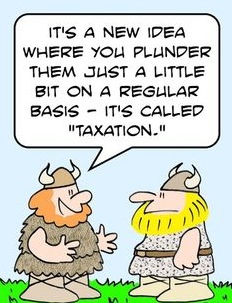 In California the “assessment” system was so badly abused by politicians that by binding referendum, in 1978 tax increases were “frozen” until a house sold. Only then could taxes be raised, and only to the new selling price of that individual property. Even more effective is the Colorado “Taxpayer bill of rights” (TABOR) which limits taxation to the rate of inflation adjusted by population growth[2]. These are solutions for B.C., but politicians would rather push taxes higher to pay for their gold-plated pensions. How much are taxpayers on the hook for in regard to political pensions? In 2007, the ruling B.C. Liberals brought in a pension plan where for every $1 an MLA contributes, taxpayers contribute $4. In the private sector this level of retirement funding is pure “fantasy”. Remember, 47% of retirees have NOTHING.

Add to that the “Property Transfer Tax” and not only are people being pushed from their homes by the property tax, but those that would like to buy just can’t afford it due to the government home transfer “tax grab”.

Worse, tax money is being channeled to these bloated pensions, while government claims it has no money to upgrade schools to safe seismic standards. Putting children’s lives at risk doesn’t seem to be a problem for our politicians which has generated wide-spread pushback by parents in Richmond, and throughout the lower mainland.