The Oval is a subsidiary corporation of the City of Richmond. Last year, as part of its annual subsidy, the city gave the recreational facility $3.2 million, which more than covered its $1.1 million operational loss.

George Duncan has served in the capacity of Chief Administrative Officer (CAO) of the City of Richmond since March 1997 and Chief Executive Officer of the Richmond Olympic Oval Corporation since its incorporation in 2008. Duncan also serves as a director on the Board of the Oval Corporation and as Chair of VROX Sport Simulation Ltd. boards.

Additionally, in 2015, the Oval leased the city’s land for $1 and received a property tax exemption of $1.6 million. If the land lease value in an arms length transaction would have been (very conservatively) $2,000,000, then that tax revenue not taken from the Oval had to be taken from taxpayers.  Similarly, a $1.6 million exemption not paid by the Oval, had to be paid by taxpayers. In total therefore,  taxpayers actually took an EXTRA hit of $3.6 million dollars, in addition to the $1.1 million operating loss, which will occur every year, due to this wasteful “vanity project”.

And it doesn’t end there. Oval staff enjoyed the Rio Olympics, on your taxpayer dime purportedly to “sell” the Oval. Did you go? Shouldn’t taxpayers see their daily itinerary and expenses if the city supports the Oval?  We think so, and it should be publically posted.

The Richmond Olympic Oval is a collosal tax burden on Richmond. The Oval continues to suck up taxpayers money and City staff’s time. As the Oval was originally destined for SFU Burnaby Mountain at $60,000,000, how did it end up in Richmond for $180,000,000?  Some of the background is disturbing when we know there is “only one taxpayer”..

Additions to the Oval supported by council, such as the museum, are adding to our tax burden and consuming City resources. These expenditures are also draining the “Richmond Legacy Conversion Plan“. Not everyone agrees with the process surrounding the museum.

Our legacy as taxpayers is the on-going post-political tax burden and subsidies demanded by the Oval. In 2015, the Corporation received a contribution of $3,815,000 from the City and included in the contribution received was $575,000 related to the Richmond Olympic Experience project. That too was YOUR tax money.

The project that was funded from the City Council approved Legacy Budget and judging from some of the published letters, it is time the taxpayers called for a referendum on the future of the Oval and its subsidies. 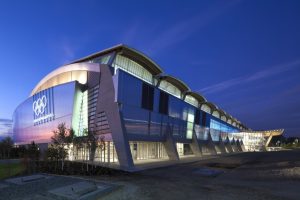