The FEDERAL politicians representing Richmond are as follows, with their rating, and comments, provided by taxpayers in the community either directly to the Alliance, or as reported in the media.

Visitors to this site may choose to accept, or disregard, the reported ratings and comments at their pleasure.

Prevailing comment: Engaged with the community, especially re Port of Vancouver activity and protecting the Fraser River.

YOUR FEDERAL GOVERNMENT IN ACTION

Debt has to be repaid. It is repaid with interest, which is money paid to lenders instead of being used to  fund education, healthcare and social programs. 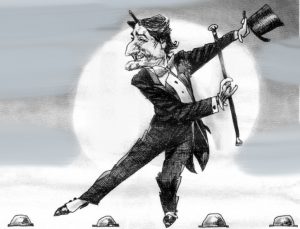 This is what your federal government is doing with your tax money:

The federal government ran a deficit of $2.8 billion over the first four months of 2016-17. By comparison, Ottawa had a $5.2-billion surplus during the same April-to-July stretch last year.

In 2015 the Liberal election campaign platform promised annual deficits of no more than $10 billion over the next couple of years.

But the Liberals later blamed a worsening economy for a revised projection in the March budget of five straight annual deficits totalling more than $110 billion (1).

What does that mean ? Canada recorded a government debt equivalent to 89.60 percent of the country’s Gross Domestic Product in 2017. Government Debt to GDP in Canada was 45.10 percent in 1980.  You, the taxpayer are again being shafted.

Incidentally, the current “stimulus strategy” is project based, which means intermittent short term employment, as opposed to long term employment such as manufacturing jobs.  Government spending, whether done directly or through subsidies, redistributes resources from the individuals who would have economized them and instead allots them toward less-preferred ends. Thus, even if a government program ultimately turns a profit, the opportunity cost represented by the foregone production represents a net loss to society. It has long been dicredited as a means to economic growth.

Now, from a surplus, to promising $10 Billion of debt, and then increasing it to $110 Billion, what will happen?  For the most part, the debt does not address the systemic policies which created the economic problem,   leaving YOUR children to make paying interest payments on national debt for an ineffective program, instead of receiving proper education, healthcare and social security.

A more detailed examination of federal taxation and spending can be found at Democracy Watch.

While this generation of Canadians and the next get buried in debt, and can barely survive, how are the politicians doing ?

Not renowned for his academic ability by dropping out of two universities, followed by previous “career pinnacles” of snowboard instructor, bar room bouncer, and substitute drama teacher — how is Prime Minister Trudeau now doing financially in politics? Hurting like the rest of us ?

Not bad it turns out, with over HALF A BILLION DOLLARS in FOREIGN money donated to his “foundation” when 8 years prior the number was ZERO. Foreign money ?  Whats going on ?  Who says politics doesn’t pay ! ! Corrupt ? Influence peddling with Chinese billionaires ? 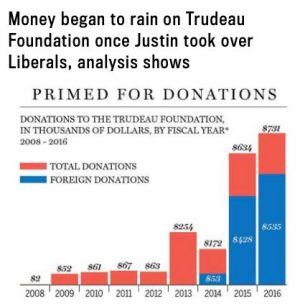 In 2016 the Trudeau federal government gave the Aga Khan Foundation $47,000,000 of YOUR hard earned money taken by taxation, instead of spending it on education, health care, and social services.

Then Trudeau took a FREE family vacation to a Bahamas island owned by the billionaire Aga Khan. When pressed, the Office of the Prime Minister stone-walled any investigation.

Result: Trudeau becomes the First Canadian Prime Minister in the HISTORY OF CANADA to be found guilty for a breach of ethics.  Resign in shame? No way !

Even if found guilty, politicians have set themselves a laughable penalty.  A breach of some sections comes with a penalty of only $500.   What would your penalty be for “ripping off” the government?

And what followed ?  A $50 million tweet ! “Hey Trevornoah – how about Canada pledges $50M to EduCannotWait to support education for women & girls around the world? Work for you? Let’s do it,” Trudeau tweeted to the South African comedian and “The Daily Show” host.   Hey Trudeau, how about first funding native education for women and girls in Canada ?